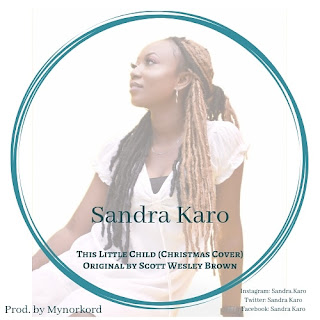 Upcoming Nigerian Gospel Artiste Sandra Karo releases a Christmas cover titled ”This Little Child”.
”This song is not the everyday kinda christmas jingle. Infact, not a lot of persons has heard this song but i connect with this song because it goes beyond just singing a song and not relating to it which is what most people do at christmas. Some of us have become so use to christmas, we no longer know the essence of it. I first heard this song 2007 thereabout and i never stopped thinking about the song. It reminds me that yes, Christ was born.. Why? It goes beyond his birth, he died and rose again and he's coming back. I don't want to ever separate all these cos you know that's a hope for me, I truely believe. I'm re_telling a story of love and hope. Just maybe someone out there will remember the things that our soon coming king said"
- Sandra Karo

The song was written by Scott Wesley Brown and its a song to reckon with.
Prod. By mynorkord