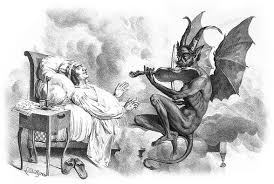 Music is a powerful tool that can raise our spirit, carry us through challenges, make us weep, etc.  the Devil's Interval also known as diabolous in musica (devil in the music) is a combination of tones  that creates some of the most chilling chords and melodies in musical history and has inspired composers to explore the darkness in music.

The devil's chord could be a bit complex for those without conservatory music background, therefore here is a breakdown of music terms used to define this mysterious tritone.

Carl E. Gardner's 1912 text Essentials of Music Theory describes a triad or tritone in music as a composition of three whole tones beginning from the root (fundamental or starting note) plus the third and fifth tones found along its scale (e.g. C, E, G) - that can get together to form either a dependent or an independent chord. An independent chord in music theory , is one that can happily conclude a composition, but a dependent triad contains dissonant or tense jumps between tones (known as intervals), and shouldn't be given the last word in a composition. 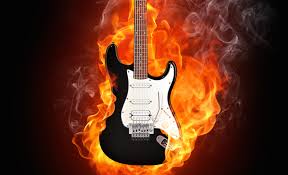 Music listeners' almost instinctive desire to hear a song through to its rhythmic and harmonic conclusion can be effective tool throughout the fields of music composition and scoring. John Sloboda, a professor of music psychology at London's guildhall School of Music and Drama explained that the dissonant intervals of the devil's tritone are particularly affecting because of the listener's instinct to find resolution in music, and the fact that we're used to getting it.

Generally,  Music is consonant rather than dissonant, so we expect a nice chord. the emotional result of dissonant sounds then might not be too different from the one experienced at the bottom of a staircase that failed to mention it's missing its last step. Deathridge said "it's like a little upset which then gets resolved or made better in the chords that follows.

The devil's tritone's deepest roots are in classical music, where it has often serves as a leitmotif to signal the presence of something sinister. It can sound very spooky and also quite exciting depending on how you orchestrate.

was the devil's tritone really banned by the church?

Well, Experts seem to think it's more likely that musical monks and other religious composers discouraged the use of the devil's tritone. Deathridge said, this particular dissonance simply won't work technically, so you are  taught not to write that interval; besides it was also difficult to sing, hence the ban. This made it look like a technical ban rather than a theological ban. Pryers notes too that  the tritone was recognized to be a problem in music right back to the 9th century and so they banned it and had rules for getting around it.

In those days actually, composing music was very much an act of praising God. the music should therefore be beautiful and moving. The devils interval which spans three whole steps in the scale was considered unpleasant and ugly and was named "diabulous in musica"- "the devil in music"- and you wouldn't use anything diabolical to praise the Lord, would you?

This musical interval - the devil's tritone, is part of the so-called Tristan Chord. For those wishing to pursue this topic further, Wikipedia has an excellent analysis of the Tristan chord.

This interval was banned from church music because of its sound but is heavily used in death metal music. It is very hard to sing unless the vocalist employs a false a chord technique also known as a scream or a growl which is often used in death metal music. death metal music is not something that is directly related to the devil. In out world, there exists two basic moods and sounds, one of beauty and one which is ugly. The devil's interval is the perfect choice of interval to express the later mood.
Labels: instrumentalists instrumentals instruments music tips piano