A stave can be defined as a podium on which musical notes, signs and symbols are written. It consist five lines and four spaces and can also be called staff. The stave is numbered from down to up.
The double bar line in a stave signifies the end of a music piece. The bar line is the vertical line cutting through the stave at regular intervals. It measures the pulse of a music piece. The stave is also known as staff.
A diagram is shown below:

CLEFS
Clefs are musical symbols placed at the beginning of the stave. Put differently, the clef is an ornamental symbol drawn far left of the stave.
Once a clef is placed in a stave, the stave takes the name of the clef. There are three major types of clefs:
• Treble clef
• Bass clef
• C clefs
Other types of clefs are sub bass clef, french violin clef, baritone clef,
TREBLE CLEF
The treble clef symbol winds round line G above Middle C; hence it is called G clef. When a treble clef is placed in a stave, the stave becomes a treble stave. High pitched instruments and voices use treble clef. 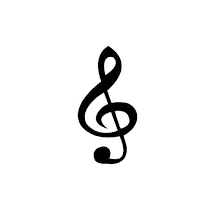 For easy recollection of the letter names, you can make use of the acronym:
Lines: Every Good Boy Deserves Favor
Spaces: Father Abraham Cooks Eggs or simply F A C E

BASS CLEF
The bass clef symbol curls round F below Middle C; hence it is called F clef. When a bass clef is drawn in a stave, the stave becomes a bass stave. Low pitched instruments and voices use bass clef.

Names of the lines

Names of the spaces

For easy recollection of the letter names, you can make use of the acronym:
Lines:  Good Boys Deserve Favor Always
Spaces: All Cows Eat Grass

THE GREAT STAVE
Though we know the stave as five horizontal lines it originated as eleven. The 11 line stave is called the great stave or grand stave. It is the combination of the treble and bass stave with a middle c and a brace. Pitch ascends through the lines and spaces of the grand stave.

LEDGER LINE
Ledger lines are short horizontal lines that are drawn either above or below the stave in order to extend the staff for the purpose of accommodating notes that either too high or too low to be written in the stave. 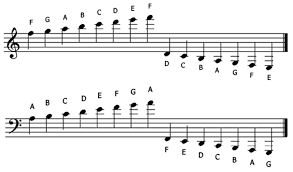