The distance between these notes is called a “harmonic interval”
We can also measure two notes played separately like these:

The distance between these notes is called a “melodic interval”

MEASURING INTERVALS
When we measure an interval, we always start counting from the lower note. We then count upwards to the higher note. For example:

The next step is to get the number of semitones that exists for each interval. This can be gotten from a simple interval chart. For the above question, 4 semitones exist from C – E, so the interval is a minor third. 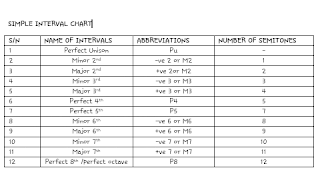 WRITING INTERVALS
Two important steps are needed here: First, you need to work out which notes you’re going to write and secondly you need to write the notes clearly and accurately.
If you to write an interval, you will be given the first lower note of the two and you would be told what interval to calculate; something like this:

You’ll also be told if you have to write a melodic or harmonic interval. This one is a melodic interval, so we’ll write the second note after the given note.
Remember that we’re counting on the lower note, which is F in our example. We’ve been told to write a major 7th, so we count seven notes upwards and make sure there are 11 semitones in the interval: F G A B C D E. the 7th note is E, so that’s the note we need to write.

We move the note to the right, but keep it close enough to the lower note that they are just touching;