An interval is formed by two simultaneous (a harmonic interval) or two successive (a melodic interval) tones. The basis of intervals lies in the octave identity and a diatonic scale.
Octave identity means that all music cultures of the world perceive tones an octave apart as similar.
The diatonic scale is considered the basis of the tonal system. Note names, intervals, and notations are based on this system. A simple description of the diatonic scale is a sequence of notes …C, D, E, F, and so on. The scale does not have a "first" note and can actually be considered to represent a generic scale
Interval names derive partly from Latin ordinal numbers. Ancient Romans were not familiar with the concept of nought (zero), so the bottom note must always be taken into account. If the number of steps or degrees between two notes is nought, the interval is named unison (and marked with number 1). If the number of steps or degrees is one, the interval is called second (2), and so on.
Diatonic intervals can be perfect (abbreviated with a P or indicated only with a number, for example 5 for a perfect fifth), major (M), minor (m), diminished (d), or augmented (A).
The diatonic scale consists of both tones and semitones, in other words, intervals of different qualities.
The intervals are counted upwards from the bottom note of a major scale; the unison (1), fourth (4), fifth (5), and octave (8), and perfect.
When the intervals are counted upwards from the bottom note of a major scale, the second (2), third (3), sixth (6), and seventh (7) are major. Counted downwards from the root note, they are minor.In practice, a major second is the same as a tone or whole step in a scale, and a minor second is the same as a semitone or half step.
The tritone, somewhat erroneously equated with an augmented fourth and a diminished fifth, was originally a sequence of three tones or whole steps. In a major scale, a tritone occurs only between the fourth and the seventh notes, for example, in C major, notes F and B. The official name of this interval is either the augmented fourth or diminished fifth, depending on the distance between the notes on the staff. Other augmented and diminished intervals are not part of the diatonic scale. A major third is sometimes called a ditone (two tones or whole steps).
It should be noted that the name of an interval is mainly determined by the distance of the notes on the staff. For example, an augmented fourth and a diminished fifth sound alike in an equal temperament, but on the staff, the distances between the respective notes are different.
The quality of an interval can be changed with the help of accidentals. Raising the upper note or lowering the bottom note increases the interval. Likewise, an interval can be reduced by lowering the upper note or raising the bottom note:
For someone beginning music theory studies, it may be difficult to recognize the quality of an interval on the staff. There are several ways to make it easier. Here is one:To start with, we must know the location of semitones in the diatonic scale.
"The Sixths and Sevenths Rule": If there are two semitones between the notes, the interval is minor; if there is just one semitone, the interval is major.
"The Thirds and Seconds Rule": If there is one semitone between the notes, the interval is minor; otherwise it is major. 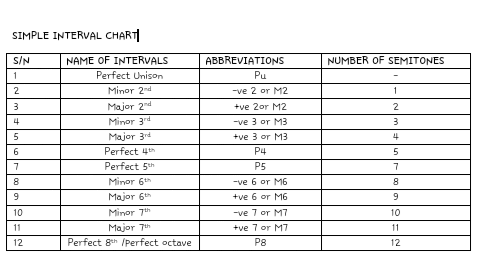