Compound Time" is the name given to music where each beat divides into 3 (rather than 2, which is Simple time).

To convert a compound time signature in to an equivalent simple one, divide the top number by 3 and the bottom by 2.
CLASSIFICATION OF COMPOUND TIME 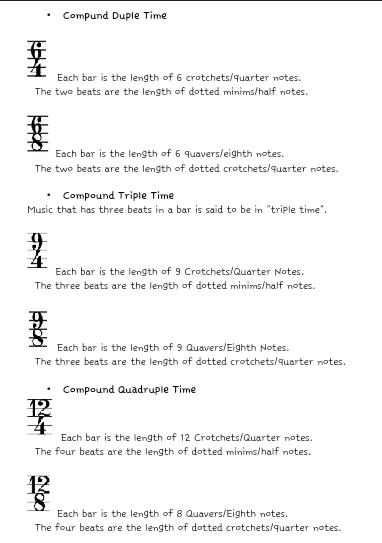 HOW TO DIVIDE THE BEAT (COMPOUND TIME) 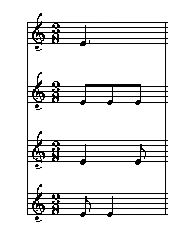 Each quaver of the compound time beat can be subdivided into two semiquavers or four demisemiquavers. 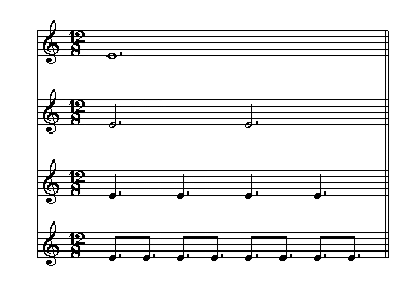 Technically we can halve dotted notes at infinitum. Though many small dotted notes do not constitute good writing. In compound time when a beat has a complicated duple (simple time) rhythm it is best to write the beat as a duplet.

x2 or x3?
A big part of writing compound time is in knowing how to exercise good judgement. By 2 or by 3? Which is most legible. Here are some examples. Would you rather read the clear rhythmic notation on the first stave or the messy notation underneath? The messy and clear notations spell the same sound and are both technically correct, but which would you rather read?

A beat can also be divided into three equal parts, called a triplet. To indicate a triplet, a figure 3 is centered over or under the three notes –
And sometimes a curved line or square bracket is added.
The essential point is that, when a crochet is divided into a triplet, the three notes are written as quavers, with a 3 to distinguish them from ordinary quavers.

A triplet, then is a group of three equal notes performed in the time normally taken by two notes of the same kind. Strictly speaking, one should say “three notes or their equivalent.

In a passage of continuous triplets, the 3s are ofte omitted once the pattern has been established; and where the triplets are obvious without 3s, composers do not occasionally include a 3 at all.